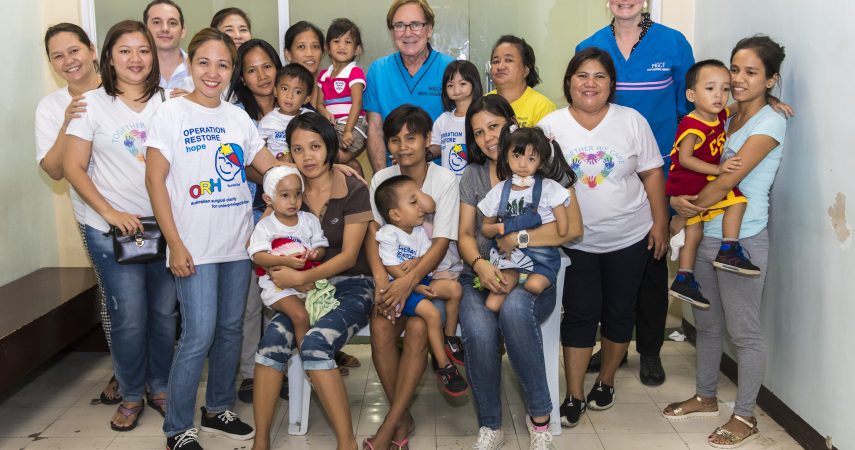 Operation Restore Hope Australia (ORHA) in collaboration with the Mijares Gurango Craniofacial Foundation (MGCF) and sponsored primarily by The Mill House Foundation have been providing charity surgery for children with extreme facial clefts and craniofacial birth defects and deformities since 2008.

In the years between 1994 when the charity started its surgical missions for cleft lip and palate and 2008, the volunteer surgeons would encounter children with severe clefts: wide clefts, facial clefts and other severe craniofacial birth defects and deformities which could not be safely operated on in a mission environment.  It was extremely difficult having to turn away the children who needed help the most but the despair of their parents on hearing that their children could not get treated without placing their lives at risk was unbearable.  Through the charity’s founder, Dr Darryl Hodgkinson’s positive relationship with the Filipino plastic surgeons, Dr Hodgkinson was able to source and begin a collaboration with Dr Taps Gurango a very talented plastic and craniofacial surgeon who was also involved in charity surgical work via her own foundation, The Mijares Gurango Craniofacial Foundation.

Since the collaboration began, ORHA and  MCGF have screened and operated on hundreds of children with cleft lip and palate, rare facial clefts, meningocele, Cruzon’s, oromandibular hypogenesis syndrome and other craniofacial birth defects and deformities.  The collaboration has also allowed for children with wide clefts to participate in a NAM (naso-alveolar moulding) program.  The NAM is an orthodontic device which is fitted shortly after birth in babies with extremely wide clefts and adjusted as they grow in the early months to bring the tissues of the lip and palate together to make a functional and aesthetically pleasing surgical closure of the lip and palate possible.

Another important aspect of this program is that it allows these children to have ongoing care and follow up as they grow in their home country with their family around them for support.  These children need regular follow up and often require care throughout their growing years.  To bring these children to Australia would not only cost ten times more and not provide better results but would remove these children from their families and communities during surgery and make appropriate follow very difficult if not impossible.

The advanced cleft and craniofacial program has continued to operate during the Coronavirus pandemic and we admire the courage of our Filipino counterparts, especially Dr Taps Gurango and her team for continuing to provide surgery and care to these patients despite the potential risk to themselves.

ORHA would like also like to express our deepest gratitude to The Millhouse Foundation for funding the majority of these surgeries since our partnership program with the MGCF began.